We continue with a look at the dinner party that was held at the Lakeside Club as told by William H. Morgan.

I was fifteen years old at the time and the details are as clear to me now as though it had all happened within the past few years.

In order that the reader visualize the pertinent events as they developed, I shall list them day by day beginning with that fateful Saturday August 23rd.

The main course of the dinner at the Lakeside Club was roast turkey. It was the first prime suspect of the cause of the poisonings. In 1919 there were no fast frozen foods as we know them today. The turkey had been preserved by what used to be called cold storage. It had been frozen but not at the low temperatures used today. Then there were the olives, brought by Helen Gahris for her table. Mother liked ripe olives and took one, but said many times afterward, that the olive was soft, and not black as it should have been, but a mottled brown. She took one bite, and since it did not taste right, put it down and did not touch it again. Ella Morris thought that the olive she had taken did not smell right, and cautioned her husband, Fred not to eat any. Fortunately for him he took her advice. Others at the table ate the olives without question. Some ate several olives. 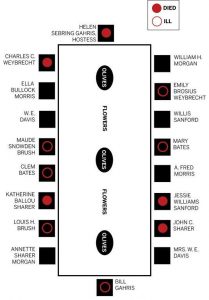 One fact is certain, those who became ill had eaten olives in various amounts. One factor that received more attention than was warranted was that of drinking at the party. Prohibition had gone into effect on July 1st that year, so the serving of any alcoholic beverage at the table was against the law. Nevertheless, Bill Gahris brought liquor with him and a number of the men had drinks in the grill.

Many of the people involved believed afterward that those guests who had taken a couple of drinks were not seriously poisoned although they had eaten the olives, and that the alcohol had saved them. I do not agree, nor do I think that any medical authority today would. The more likely explanation is that some of the olives were more contaminated than others, which would indeed account for the varying severity of the subsequent illnesses. Personally I wouldn’t want to rely on a couple of martinis to prevent botulism, had I been exposed.

The most ridiculous story that made the rounds in Alliance was that the ripe olive story was merely a cover up and the guests were poisoned by wood alcohol in the bootleg liquor. This one needs no further comment.

The only guest who felt any immediate ill effect after dinner was Col. Weybrecht, who became quite nauseated. One would think it might have saved him, but apparently had no effect. Whether it was caused by the olives or some other factor will never be known.

Tomorrow: First Effects of the Tainted Olives are Felt