Funerals Are Held for the Dead

The entry in William H. Morgan’s accounting of the Olive Poisoning for August 29 is very brief but relates how difficult a day it was:

This was a difficult day. Uncle John and Aunt Kit Sharer were buried in the morning. Col. Weybrecht’s funeral was in the afternoon.

For more details of the events of the day, we turn to the accounts in The Alliance Review. Lengthy articles are given with many details of the funerals and processions for the dead. The following are part of the address by Karen Perone given during the 100th anniversary memorial service on August 25, 2019.

The funerals for the Sharers were short and simple with only family attending at their home. The service followed the Episcopal Ritual and included no eulogies and no music. They occurred on Friday morning, August 29. Their memorial here at the Alliance City Cemetery depicts a young woman weeping. It is thought that the young lady was the couple’s only daughter, Ann, who was only 7 at the time of her parents’ deaths but could also symbolize John’s mother who buried her son.

At noon on Friday, August 29, the mayor requested all businesses and stores to close as the community prepared to pay its respects to Col. Weybrecht. Flags were lowered to half-staff and the city mourned its favorite son. Funeral services were held at the Weybrecht home on South Union Avenue and were attended by a large number of friends, relatives, military and civil associates. A men’s quartet from the Rotary Club sang renditions of some of Col. Weybrecht’s favorite hymns, including Face to Face.

Following the service, a funeral cortege 10 blocks long formed. A military unit formed on East Market Street and Freedom Avenue and a civilian unit formed on East Oxford and Linden. The military unit consisted of a firing squad from Company K, Company B and the 146th US Infantry, World War veterans, Spanish American veterans, and veterans of the Army, Navy, and Marines. The 146th Infantry Band of Akron led the military division. 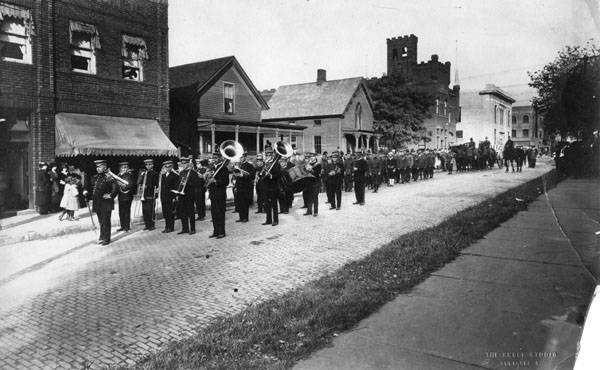 Funeral procession lined up on E. Market Street in Alliance. It included the Alliance City Band, members of the 146th Regimental Organization, and funeral cortege with a car carrying the honorary pall bearers. The procession was 10 blocks long.

The civic unit was led by the Alliance City Band and consisted of 800+ workers from Morgan Engineering and 100 workers from Alliance Machine.

As a military tradition, Col. Weybrecht’s riderless horse followed the hearse. The horse was fully dressed with a saddle, bridle and saddle cloth. His riding boots were reversed in the stirrups, and his saber was hanging from the saddle horn.

The cortege proceeded to pass the Weybrecht home at 29 S. Union Avenue and made its way to the Alliance City Cemetery. It is estimated that 10,000 citizens were waiting there to pay their last respects. Director Emil Rinkendorf of Alliance led the choir of buglers in a stirring rendition of Taps. He also led a similar performance at the burial ceremony for William McKinley.