William H. Morgan, the son of Col. Henry Morgan, recounted his story in a letter written to Rodman Public Library Director, Harriet Clem in 1982 as part of the library’s Oral History Project. Over the next few days, we will relay Mr. Morgan’s recollections of that fateful dinner party, one which was to celebrate Col. Charles C. Weybrecht’s return from France at the end of World War I.

The story begins with two brief social column items from The Alliance Review: 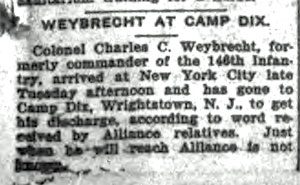 Col. Charles C. Weybrecht returned to the United States via the steamer Rotterdam on July 22, 1919 where his wife, Emily and Mrs. L. L. Lamborn had come to meet him. From his landing in New York, he proceeded to Camp Dix to get his discharge.

Tomorrow, we will tell the story of who Col. Charles C. Weybrecht was.