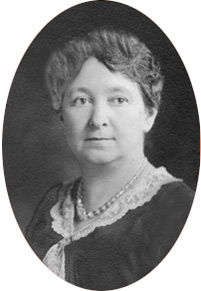 She came to Alliance with her family when she was eight years old. Her mother died when Mabel was just nine years old. The family was divided and she was adopted by Matthew and Mary Earley, who were friends of the family. The Earleys allowed Mabel to keep the Hartzell name.

Mabel Hartzell was a very well-educated woman and was extremely active in activities in and for the Alliance community.