The Alliance Historical Society Antique and Collectible Auction scheduled May 18 at the Alliance Elks Lodge will be an opportunity to peek into, and go home with, a little bit of Alliance history.
That was the objective of Frances “Peanut” Kirby when she donated many of the items that will be auctioned that day to support the Alliance Historical Society to maintain and preserve the Mabel Hartzell Historical Home.
She first started collecting historic items when she took over the former VFW at 532 E. Prospect St. to turn it into a restaurant and bar. She opened the La Nostra Famiglia Cosa in 2000.

“I wanted to make it for the older generation,” she said, “quieter and a little bit different.” She did that by buying all she could to decorate it and to give it a feeling of local history.
She was never an antique dealer, she said, but for several years worked for Kommel Auctions as a clerk, runner and sorter. “I found some great things,” she said, “but I had to bid on them like everybody else.” Her two prize purchases were an ice box from the late 1800s, which is now in the Mabel Hartzell House kitchen, and a working hand-cranked Victor Victrola Phonograph from the early 1900s which she has in her living room.
But hundreds of other items, which she no longer had room for, will be sold at the auction.
“When I sold my place I had no place to store things and no time to have an auction, so I walked down to John Gross’ house and offered them to the Historical Society,” she said. Gross is a local historian and a member of the Historical Society board, and she knew they’d do good things with them.
“I wanted to sell things so that people would see their history,” she explained. “It amazes me what people don’t understand.”
“Today’s youth have no idea how far we’ve come in life,” Kirby said. “When kids see things like we’ll be selling they may be able to relate better to the life they have now and not take anything for granted.”
“Kids don’t recognize what they have, and if they went back in time they wouldn’t know how to survive,” she laughed. “They aren’t teaching today what and how things used to be, so I hope seeing the items will help them understand.”
Kirby, who got her nickname “Peanut” in the first grade when a friend affectionally said, “she ain’t much bigger than a peanut,” will help with the auction in which nearly 200 items will be up for bid. 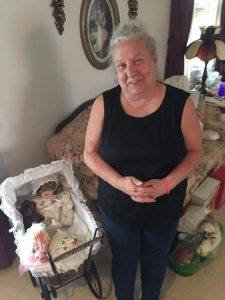