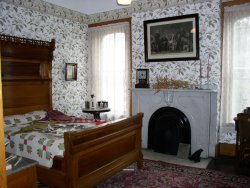 The tall headboards are a notable feature of the beds in these rooms. Before the days of centralized heating and good insulation, the tall headboards would help block cold drafts leaking through outside walls.

Some items of interest in this room include: 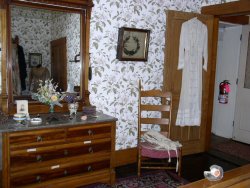 An heirloom wreath made from human hair hangs in a shadowbox on one of the walls. In the 19th century, it was common practice to save one’s hair in a hair pot after brushing one’s hair. The hair would be woven or braided into a decorative wreath to be presented to the family as a memento upon the person’s death.

Our final stop is the maid’s bedroom.