#2. Taylorcraft Supports the WWII Effort with Planes for England 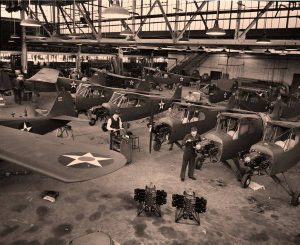 O-57 in production at the Taylorcraft hangar. The airplanes would be used by the Army Air Corps as a liaison airplane with ground forces. The “O” was the Army’s term for “observation type”. An order for 21 of the model DC-65 Tandem airplanes was received in November 1941 which forced the factory into round-the-clock production. They were identifiable by their olive drab paint and the blue circle with white star and red dot in the center of the star. During World War II, women were called into action as factory workers taking on roles traditionally held only by men. Taylorcraft created a welding school to meet their added demands for aircraft for the war effort. More than a dozen women at a time could be trained.