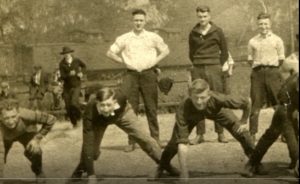 A friendly game of football at Goat Hill

Located at the corner of Morgan Avenue and Garwood Street, a marker pays tribute to the many sports teams who played for the Goat Hill Athletic Club. The memorial reads, “Dedicated to an era of Goat Hill athletes, 1914-1927,” and lists John Hallman as manager and Lou Skelly as president. 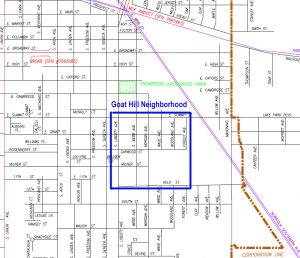 The ball fields of Goat Hill were always busy hosting baseball and football games. Some players even hit the big time, including Pro Football Hall of Famer, Len Dawson, who played for the Kansas City Chiefs.

Between 1930 and 1947, the athletic fields between Garwood and Woodland were converted into GI temporary housing. This included 40 single and 20 double housing units. Later, this field became the home of Morgan Elementary School which was opened in 1957 and demolished in 2004.

For more information on and photos of Goat Hill, visit AllianceMemory.org. A memoir of Red Artino can also be purchased from the Alliance Historical Society.