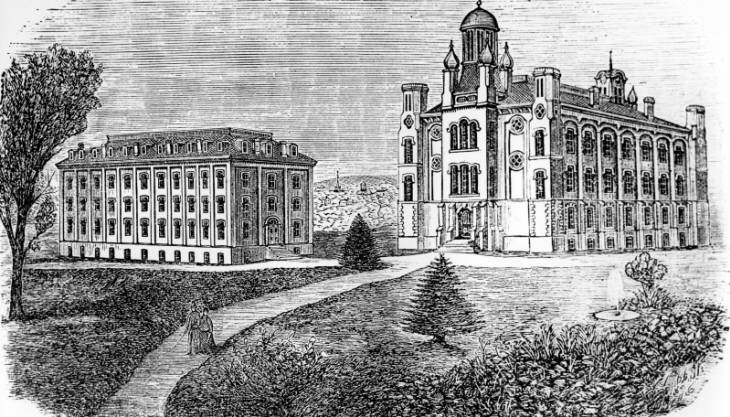 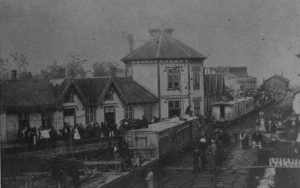 President-Elect Abraham Lincoln made a brief 20 minute stop at the original Sourbeck House located on the north side of the railroad tracks at the Crossing, on February 15, 1861, as he traveled from Illinois to Washington, DC for his inauguration. His remarks were brief and could barely be heard over the sound of a train whistle. He simply stated that he wished to make it to Washington before his inauguration and if he were to give a long speech at each stop along the way, he wouldn’t be able to make it on time. 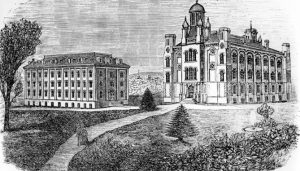 Mount Union College received its charter in 1858 and then became a full member of the Methodist Conference in March 1864. But no dedicatory program had been held to celebrate the founding of the College. President Hartshorn searched for some prominent figure of national stature to be the featured speaker. He singled out the Honorable Salmon P. Chase, ex-Governor of Ohio and the current Secretary of the Treasury under President Abraham Lincoln. Hartshorn was persistent and wouldn’t take no for an answer from Chase. In his opening remarks, Chase retorted, “I replied that I could not attend, and gave him an excuse for not coming, which I thought sufficient to satisfy any reasonable man. But allow me to say the President is not a reasonable man, and would not accept an apology or excuse, and visited me in person … and again pressed me to be present.” The dedicatory services were held in the new college building (Chapman Hall) on December 1, 1864 with Chase bestowing blessings on the educational institution. 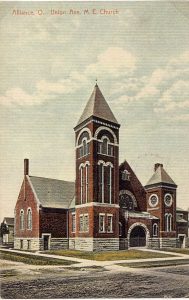 Ground was broken for the Union Avenue Methodist Episcopal Church in June 1893. On July 13, 1893, the cornerstone was laid in a grand ceremony led by Bishop Joyce and assisted by then Governor William McKinley, a trustee of Mount Union College. The cornerstone, donated by the Mount Union Class of 1894, consisted of a copper box containing newspapers of the day, the 1893 commencement program, a history of the church, minutes of the Mallalieu League, names of donors and committee members and a Columbian half dollar.